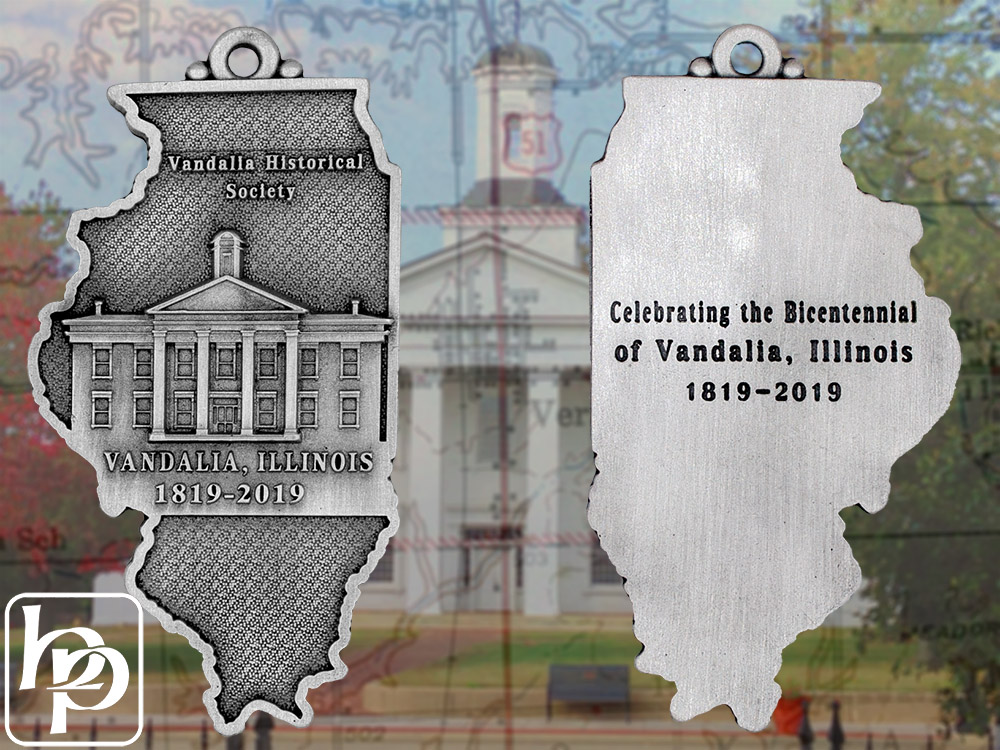 The design Vandalia decided on is an outline of the state of Illinois with the words, “Vandalia Historic Society” and “Vandalia, Illinois 1819-2019,” on the front. It features a highly-detailed image of the Vandalia Statehouse. The back reads, “Celebrating the bicentennial of Vandalia, IL 1819-2019.”

Founded in 1819, Vandalia, Illinois is located in Fayette County. It is believed its name likely originated from the Germanic Vandal tribe. It is also possible the name is a Latinization of a Dutch family name or that it came from a small Native American tribe of the 19th century. From when the town was first founded in 1819, it was known that it would be the state’s capital. The state’s previous capital, Kaskaskia is in fact situated along the Mississippi River and was under the constant threat of flooding.

Congress donated land to the newly established state of Illinois in 1819 to build a capital city. Five officials were given the task of choosing the location for the future city. They chose a wooded area known as Reeve’s Bluff, located on the Kaskaskia River about 90 miles northeast of the former capital. At that point topographers, assessors, and builders got to work building a town before the 1820 meeting of the Illinois General Assembly.

To learn more about Vandalia’s rich history and even Abraham Lincoln’s first statewide role in what was then Illinois’ capital, click here.

Our custom pewter pieces are truly one of a kind, and our goal is always to take the customer's vision and bring it to fruition. For the City of Vandalia’s 200th Anniversary, we were happy to bring their idea to life with a unique ornament that represents their proud city and its rich history.

CLICK HERE FOR MORE INFORMATION ON HOW TO COMMISSION A CUSTOM ORNAMENT FOR YOUR TOWN/CITY ANNIVERSARY, A CORPORATE GIFT, OR MORE!