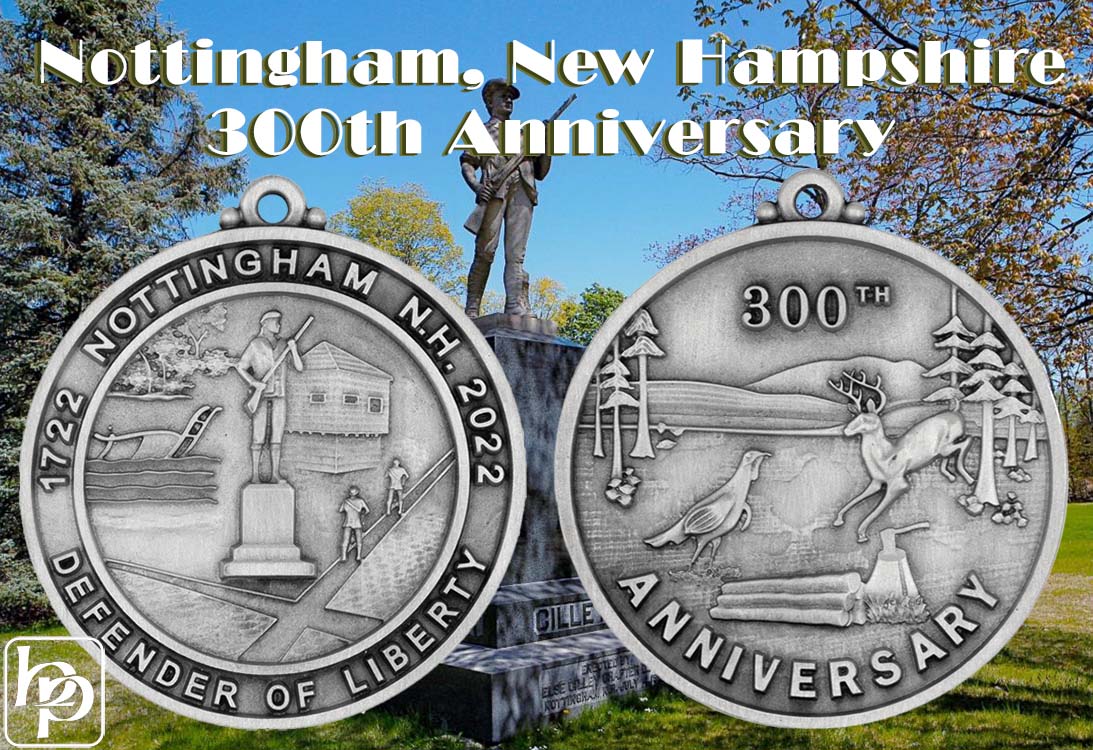 The Four Generals - A Brief History

The statue pictured on the front of the ornament is called the Four Generals and is located in Nottingham Square, at the corner of Route 156 and Ledge Farm Road. It is a granite monument, standing at 16 feet, with a minuteman on top and lists the last name of the four Generals, each engraved on a side of the square base. The names are Butler, Cilley, Dearborn, and Bartlett. The statue was dedicated July 4th, 1917 by the Else Cilley Chapter, National Society Daughters of the American Revolution.

General Joseph Cilley is probably the most renowned of the four generals. He took part in the 1774 raid on Fort William and Mary and the following year was appointed Major in Colonel Poor’s Regiment. He led a group of 100 men from Nottingham to Boston, upon hearing of the Battle of Lexington. He went on to fight at Monmouth and other crucial battles and was made Major of the First NH Regiment. Cilley was presented with two pistols after the war by the NH Assembly and they are on display at the NH State House.

The second general named on the monument is Henry Dearborn. Dearborn was a doctor in Nottingham before the start of the Revolution. When fighting at Lexington and Concord began in 1775, he led 60 men from Nottingham to fight in the Battle of Bunker Hill under General Stark. Later that year, Dearborn fought with Benedict Arnold and General Richard Montgomery, where Dearborn was taken prisoner until May of 1776. On March 19, 1777 he was appointed General of the 3rd NH Regiment. He went on to serve under General Cilley and fought at Ticonderoga, Burgoyne and other battles. During the War of 1812 he was ranked Major General and then served under Thomas Jefferson as the Secretary of War.

General Henry Butler is the third person listed on the Four Generals statue. The son of Reverend Benjamin Butler, the minister in Nottingham, Henry Butler was Captain of a company at West Point in 1780, under Colonel Thomas Bartlett. He followed Bartlett to the 1st NH Militia where he served as Major General for many years. He went on to hold many town and state offices and became Nottingham’s first postmaster.

The fourth of the Generals that appear on the statue is Thomas Bartlett. Bartlett was born and raised in Nottingham and served as town clerk for 26 years. He also served as Lieutenant Colonel in several regiments ranging from 1776 to 1780. When Benedict Arnold betrayed the Continental Army, he was Colonel of a regiment at West Point. He went on to serve many different positions within Nottingham and in 1790 was appointed Justice of the Court of Common Pleas. He held that position until his death in 1805.

The back side of the ornament shows some of Nottingham’s flora and fauna as well as some stacked timber. Several small dams in the town provided water-power enabling the building of mills for cutting lumber, grinding grain as well as ‘fulling’, a process of cleaning and creating a nap on coarse, woolen homespun cloth. Nottingham at one point had seventeen running mills.

To learn more about the statue and Nottingham’s history please refer to: