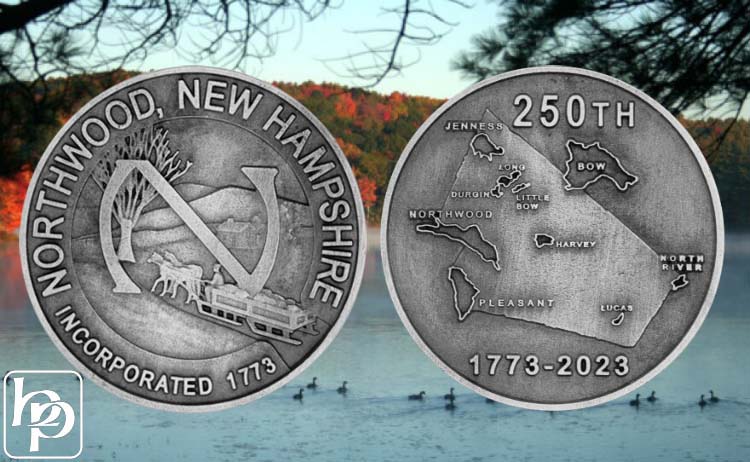 Northwood is home to roughly 4000 residents. It is situated on Rt 4 which connects Concord to Portsmouth so the town has 13000 commuters drive through a day. Governor John Wentworth incorporated the town on February 6, 1773 when a large area of land called “North Woods” was separated from Nottingham. At one time the town had six sawmills which were later replaced with shoe factories. Now it is a popular vacation destination as it has ten lakes, many antique stores and restaurants.

The coin features the town’s emblem which has a horse drawn sledge, a tree in the background, and a large N over the image. It reads “Northwood, New Hampshire Incorporated 1773.” The back of the coin shows a map of the town along with ten lakes and their names: Jenness, Long, Durgin, Little Bow, Northwood, Harvey, Bow, Pleasant, Lucas and North River. It also says “250th 1773-2023”

Our custom pewter pieces are truly one of a kind, and our goal is always to take the customer's vision and bring it to fruition. For the Northwoods 250th Anniversary, we were happy to bring their idea to life with a unique coin that represents their proud city and its beautiful landscape.