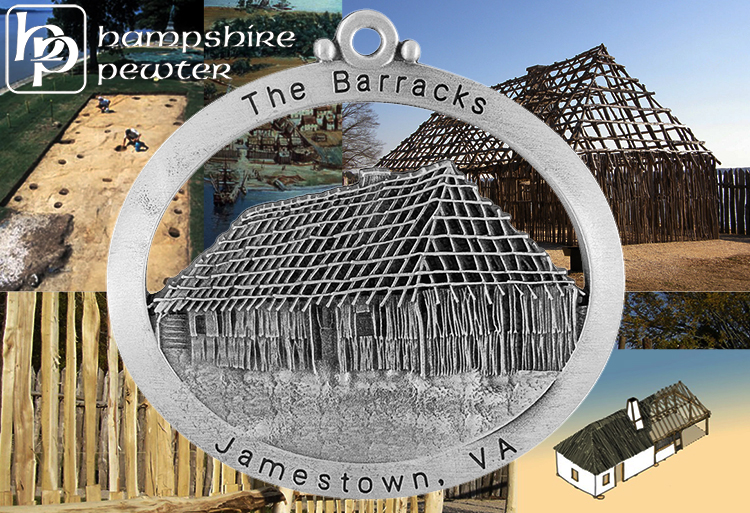 Posted by Alison on 4/8/2021 to Commemorative Gifts

In 1995, Jamestowne Rediscovery archaeologists uncovered a site where a barracks stood over 400 years ago. They determined the building was built in approximately 1607-1608 and only stood until 1610. The structure was 54 feet long and 18 feet wide. The depth of the postholes indicate the stakes supported a two-story structure.  Through studying the architecture of the time, surviving parallel structures in England, and their archeological discoveries, Jamestowne Redicovery reconstructed the barracks in 2006. They conjecture the building had a central wooden-frame chimney that would have been covered in clay. The floors were most likely dirt, with wooden doors and open windows.

Construction of the “new” barracks took about three months. The builders used Locust wood, sourced from North Carolina and only expected to get roughly 10 years out of the structure. The building stood for 14 years, which allowed for experimentation in the architecture of the building, recreating the mud walls, thatched roof, and Y-shaped supports. The project proved to be admired, not only for illustrating what the original architecture of Jamestown looked like, but also attesting to how important archeology is in reimagining our past landscapes.

The barrack was taken apart and rebuilt in 2020, after it proved to be unsound. Jamestowne Society funded the entire rebuild. A couple improvements they implemented were to put the studs above ground rather than in it, and to pressure-treat the wood used. They expect to get around 20 years out of this new structure.

Learn more about this neat project and all Jamestown has to offer here.