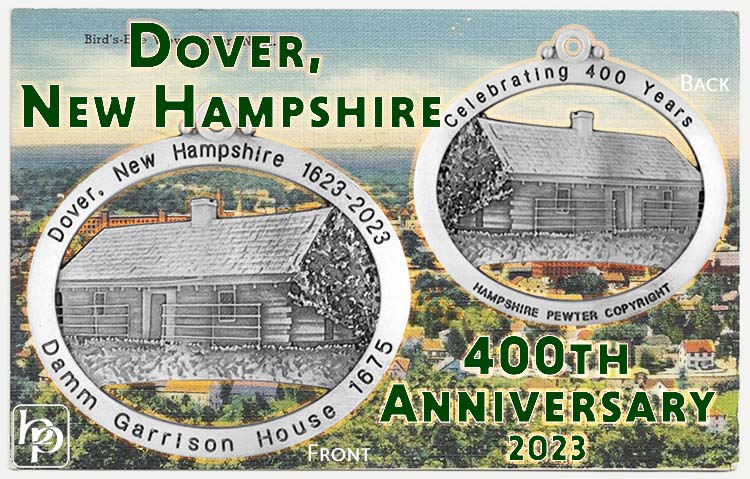 Dover, New Hampshire is the oldest settlement in New Hampshire and the seventh oldest in the United States, established in 1623 by William and Edward Hilton. For a brief time Dover was an independent colony named Northam. In 1692, Northam became part of the Massachusetts Bay Colony. The original township of Dover included Durham, Madbury, Lee, Somersworth, Rollinsford, and parts of Newington, Newmarket, and Greenland. Dover had a thriving shipbuilding industry in the 1700s and by the early to mid-1800s the city became one of the leading cotton manufacturers in the US. This was all due to Dover’s geographic advantage being located on the Bellamy and Cocheco Rivers. Dover later grew to develop strong brick and shoe industries. Dover is continuously developing economically today and this is evident when visiting Dover’s quaint yet bustling downtown and Cocheco Falls Millworks area.

The Damme Garrison house is a relic of Dover and is located at the Woodman Institute on Central Avenue. William Damme built the garrison house in 1675 for his son, John. The house is unlike other New England homes built around this time as is it built of strong hewn logs, which allowed it to remain intact all these years. The house was originally located in the back river region of Dover and had a stockade fence surrounding the structure with slits in it for muskets. At this time there was usually one garrison per neighborhood for the protection of the settlers. Dover gained the nickname “Garrison City,” because it had 17 garrisons in one settlement. The Damme family used the house as their residence, but allowed their neighbors to stay in it with them when there was danger. This is the only garrison in Dover that survived the Cocheco Massacre, a raid on Dover led by Chief Kancamagus in 1689, beginning the King William’s War.

“You will experience the space that our colonial founders inhabited. Smell the wood. Imagine the dim light. See their rough-hewn tools and appliances. Walk across the wide wooden boards of the first forests. Go up the ladder-thin stairway and stand in the sleeping area. Imagine yourself in a wild world, fearful of wolves, bears, bobcats, and other unseen enemies. Imagine the closeness and security inside the log fort, once surrounded by a tall palisade.”

To read more about the Damm Garrison house, read https://www.tmsarchitects.com/step-inside-dover-nhs-oldest-house/. For information on visiting, please check out the Woodman Institute at https://woodmanmuseum.org/. The Dover ornament is available to purchase at the Dover City Clerk's office at City Hall as well as the Dover Public Library. We love custom projects and working closely with our clients to create a design from a logo, picture, or even an abstract idea. Contact us for more information on our custom process at (866) 282-7384. Happy 400th Anniversary Dover!

**Update: Looks like the limited edition of 200 has already almost sold out and were featured in Foster's Daily Democrat. Click here to read the article!