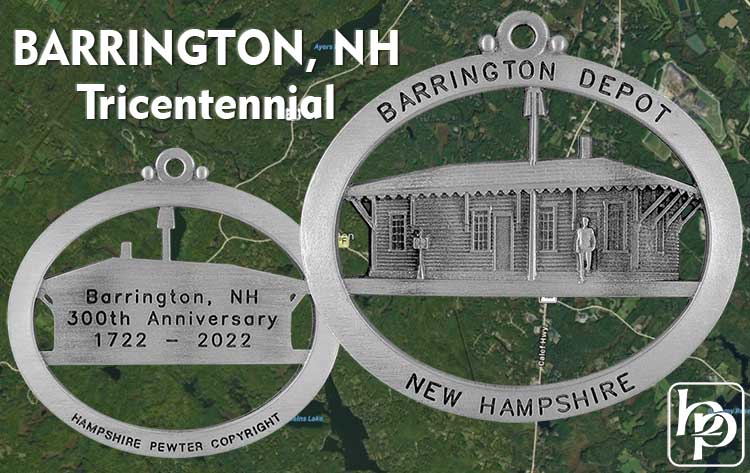 Barrington is located in Strafford County in the southeastern part of New Hampshire. It is adjacent to Dover, Rochester, Madbury, Lee, Durham, Nottingham, Northwood and Strafford. It was incorporated in 1722 and named for Samuel Shute of Barrington Hall, colonial governor of Massachusetts and New Hampshire. The town was slow to settle initially, but by 1810 had 3500 residents.

While Barrington covers 48.5 square miles, its’ population is still under 10,000 people giving it a true New England small-town feel.  Barrington is drained by the Isinglass and Bellamy Rivers. Swains Lake and Mendum’s Pond are in the south. The highest point in town is an unnamed summit near its western border, measuring 610 feet above sea level. The highest named summit is Bumfagging Hill, at 601 ft. The town is located entirely in the Piscataqua River watershed.

The Barrington Tricentennial Committee are selling the ornaments at Calef's Country Store, George Calef Fine Foods, The Christmas Dove, Knight's Garage and the Barrington Fire Department. Be on the lookout for Barrington’s next custom ornament and if you’d like to learn more about the custom process and see more of our work visit https://www.hampshirepewter.com/custom-made-pewter-corporate-gifts.