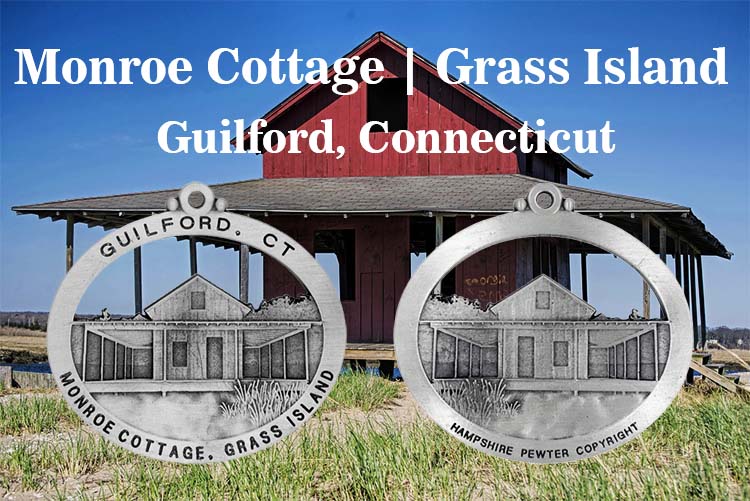 Guilford is a town located on the coast of Connecticut halfway between New Haven and Saybrook. It was settled in 1639 by a band of Puritans after being purchased from local Native Americans, represented by female chief, Shaumpishih. They called the plantation they established Menuncatuck, which would later be called Guilford. The town has a population of about 22,000 and is known for its large quantity of historic homes.

Our custom ornament for the Guilford Keeping Society, Guilford, Connecticut shows the historic landmark, Monroe Cottage. The cottage was originally built by a local druggist, J. Harrison Monroe on the west side of Grass Island. Monroe’s family used the summer cottage until it burned down in 1936. Monroe rebuilt the cottage a few years later in 1940. After facing several hurricanes, Monroe decided it best to move the cottage inland. The entire structure was lifted and moved in 1950 to the location it’s at today.

Monroe and his family continued to enjoy the cottage until 1965 when it was sold, along with the surrounding seven acres, to the town of Guilford. The town decided the area should be a park and was, therefore, maintained by the Parks and Recreation Department of Guilford. Minor maintenance and repairs were made over the years in order to keep the structure standing. The cottage began to be called “Grass Island Shack” and is now the second most photographed and painted building on the East Coast. The Shack served as a gathering spot for picnics and for boaters to stop by.

Over the years the cottage continued to deteriorate and became unsafe. In 1994, Richard Werle, didn’t want to see the Shack closed down, so he began the project “Save our Shack.” With a lot of time, planning, fundraising, and community support he was able to make the needed repairs to make the building safe.

Years later, the structure had worn and weathered yet again and in 2015, it was finally blocked off due to safety concerns. This is when John Markowski, a Life Scout from Boy Scouts of America Troop 471, decided repairing the historic landmark would make an ideal Eagle Scout project and so “Save the Shack” began. Markowski raised over $28,000, including matching funds, up to $10,000, from the Guilford Foundation. Any remaining funds were put in the Save the Shack/Grass Island Fund for all future maintenance and repairs. It took a full year but in November of 2016, the Grass Island Shack had been fully restored. The project entailed replacing the roof, front porch, and leveling the structure. Grass Island Shack, or Monroe Cottage is now open to the public again and continues to be famous hangout spot and an iconic staple of Guilford, Connecticut.

This is the fourth ornament in a series for the Guilford Keeping Society.  To view their other ornaments or to purchase any visit their website at https://www.guilfordkeepingsociety.com/.

If you are interested in having a custom piece done, VIEW MORE of our custom pewter works and learn more about the process! Feel free to give us a call at 866.282.7384 to discuss your ideas and to get more info on the custom process.

For information on the Guilford Foundation check out http://www.guilfordfoundation.org/. If you would like to read more or better yet donate to the project, visit http://www.savetheshackguilford.com/history.html.